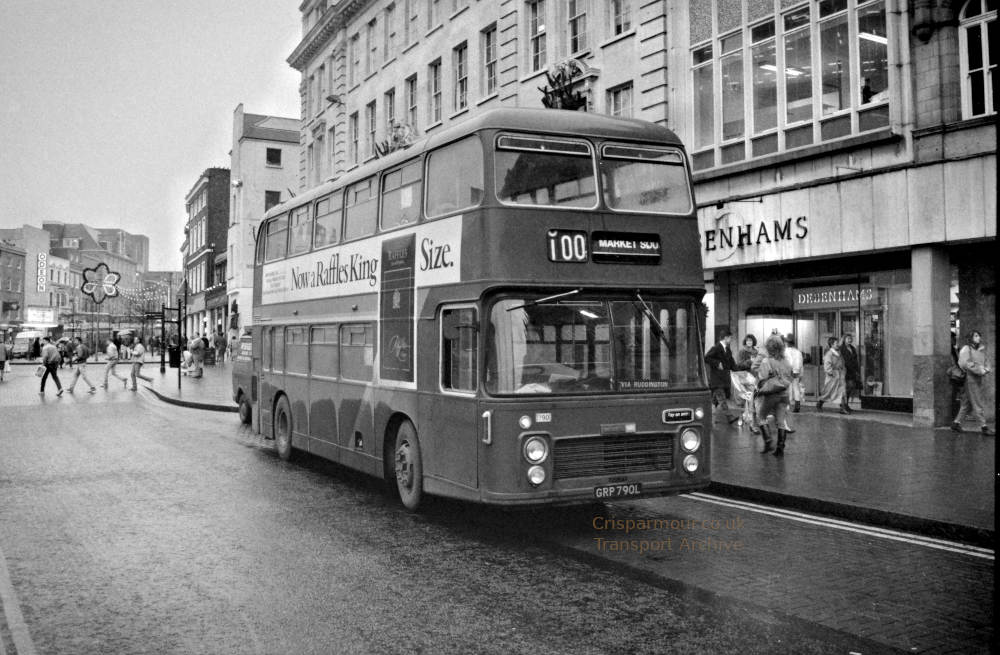 Writing for the fun of it I like to throw in a few Gaggs now and again. And here’s one I turned up in my 4000 black and white negatives from the 1980s.

It’s the 23rd of December 1988, another gloomy grey winter day, and I’m out with a companion in Nottinghamshire in search of Bristol/ECW buses and perhaps a few scoops of Kimberley Ale [before they sold out to Greene King] in the Trent operating area. Our “piece” for the day was a Derbyshire Wayfarer ticket. I can see that we used the Silver Service to get to Chesterfield and I had a ride on a Fleetline there.

I seem to remember being in Hucknall and my companion being disappointed in buying a “Christmas pudding cake” from a bakers’ shop only to find that it was a plain sponge dressed up in a veneer of chocolate. Swizz. Other than that, just the photos and a few bus numbers to jog my memory which recalls very little of the escapade.

Of course, by this time we were two years into the deregulated era so there were a lot of second hand buses knocking around in motley colour schemes, sometimes smartly repainted into a proper livery, sometimes wearing the livery of its previous owner such as this one, former United Counties Bristol VRT Mk 2 no. 790.

It’s Nottingham city centre and people are – wow – out shopping. They look quite cheerful about it, don’t they? We’ve got a Christmas tree in Debenhams, the Stonewash Beatles crossing the road in the background, it’s so 80s! Back when you could actually park a bus in front of Debenhams…

The operator is the delightfully named Gaggs of Bunny, a long standing operator in the Nottinghamshire area. The bus, on service 100, seems to have come from Bunny itself, the “via Ruddington” board pointing back towards the home base. It appears that Trent had a route 101 from Nottingham to Loughborough which went through the village of Bunny so this number seems to have been chosen to attract Trent’s custom.

This post being prepared on the 1st of July, so it is sobering to think that in exactly six months it will be New Year’s Day 2022.