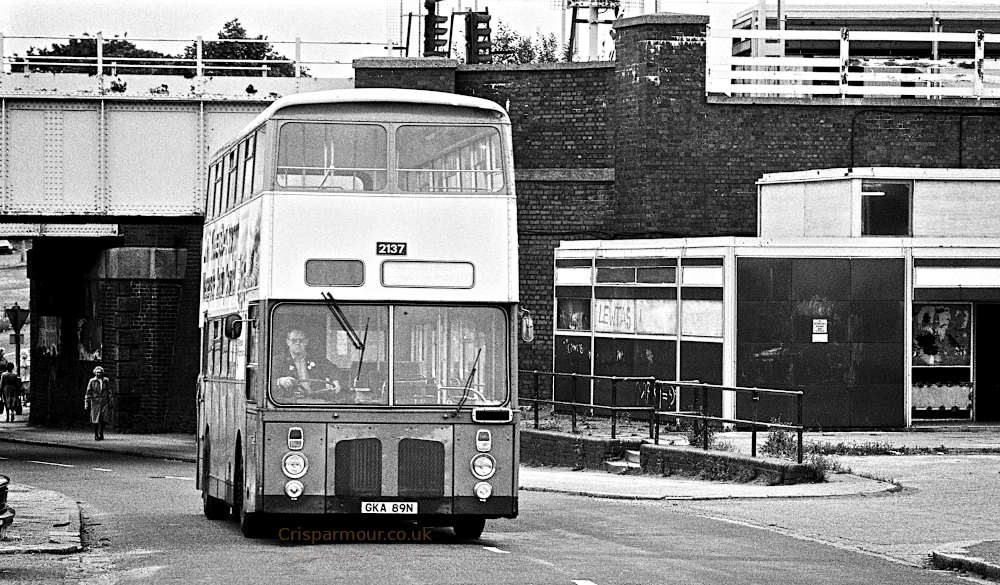 Back in August 1985 we were still a clear year before deregulation. I was very active with my camera, having discovered the affordability of bulk black and white film and a darkroom. Most of these pictures existed only in negative form for many years until technology made a reasonably quick scan all that was needed to unleash their full potential.

On the 23rd of August that year I was visiting my family home in Runcorn and decided to have a day travelling around Liverpool. The “freedom of Liverpool” could be had during off-peak hours by way of the very affordable Saveaway ticket. This was a scratch card that was available with a single area of validity [of the four Merseyside Areas, Liverpool, St Helens, Southport and Wirral] or, more expensively, for all areas. I must have had an all areas ticket that day because I found myself at St Helens after starting in Liverpool.

Coming from Runcorn, the Saveaway would not be available until I arrived in the Metropolitan County of Merseyside so I must have caught a train from Runcorn to Allerton because my notes tell me I made a local trip in Runcorn on Crosville SNL4 and then caught MPTE 2137 on the 86.

My photos tell the story from there. I spent a while hanging around Horrocks Avenue, by Allerton station photographing buses on the 86 service. At the time this was still largely operated by MPTE’s East Lancs bodied Bristol VRs which in those days were operated out of Walton depot and, in the case of the 86, Garston.

The photograph above of VR 2137 running out of service into the nearby Garston depot shows the old building at Allerton station. This has since been replaced by the Liverpool South Parkway interchange. This comprises a terminal linking the Merseyrail Northern Line [from Hunts Cross to Southport], the “City Line” former Cheshire Lines route from Warrington to Lime Street and the West Coast Main Line from Crewe. In addition to all that, a bus station linking the southern suburbs and the airport is part of the complex.

So far, London trains do not stop at South Parkway though I would imagine that it would be high on the list of aspirations for local transport authority Merseytravel and John Lennon Airport.

Allerton would have been the place to buy my Saveaway ticket, and this would be valid only from 0930. I imagine that my arrival was before that time to allow me to make the most of its validity. I would have bought my “piece” and validated it and returned to the main road outside looking for VRs to photograph. 2137 may well have been running in from a peak hour turn, perhaps a schools or work service. It was to feature in another photo soon after because it quickly returned from Garston with another driver on an 86 service to the city centre.

The beauty of a telephoto lens is the ability to shoot an approaching bus and still be able to hail it in good time. I know that I boarded this bus and sat, unusually for me, rear seat upstairs. Nine-thirty buses were inevitably busy in Liverpool, for as well as the Saveaway validity starting then, so did the OAP “Twirly” passes. Liverpool is reputed for its Twirlies, standing at bus stops at 0915, hailing buses to ask the weary driver “am I too early?”

So rear upstairs seat it was, the front perch evidently occupied in the photo and perhaps the next best place, the rear downstairs bench over the engine, would have been taken too.

In 1985 Liverpool had yet to realise the tourist potential of Beatles fans so I would not have realised on the next stretch of the 86 route that I passed within sight of the adolescent Paul McCartney’s Forthlin Road home. Further along I would not have failed to appreciate the passage through the Penny Lane terminus with its shelter in the middle of the roundabout and everything else. It was just beyond here that I must have realised that the next 86 service had caught us up.

It’s a well-known phenomenon of high frequency services that buses tend to bunch up at busy times as the first bus along gets a pasting and becomes late. The next one will catch up, overtake, and then itself be delayed as it encounters the crowds of angry inconvenienced passengers who have accumulated along the way. So 2139 followed and I had this opportunity to photograph it in a rather down-at-heel Smithdown Road. I think that the Prince Alfred Road depot is pictured behind. This is what it looks like now [not much improved, really]:

The 86 service enters the city via Catherine Street and passes the Philharmonic Hall before descending Leece Street. I know that I left 2137 at Catherine Street and started to take more photos but there I will pause for now. Those views are for another day, reader, I will show them to you soon.