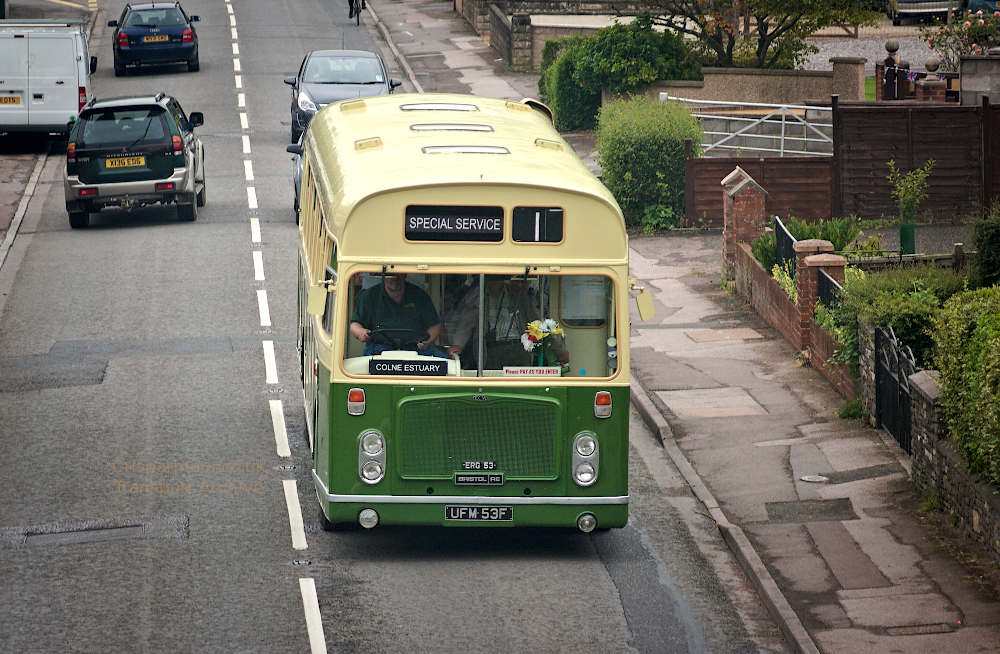 This beauty has been the talk of the Bristol fan groups over the last week or two after participating in a Royal Blue commemorative road run along the south coast of England.

Its frequent appearances in the forums had me reminiscing about my now very distant childhood, rather more than 50 years ago when the same bus looked very much like this: not, as now, because of a painstaking restoration but because it was still fresh out of Lowestoft. It was the first bus I became familiar with because of its special colour scheme and luxury seating and it made a big impression on me at a tender age.

As far as I can make out I started school in October 1968, at the start of the half term before my 5th birthday. At the time I lived 500 yards from my school and would be collected at lunchtime and taken home to be fed. This was after an incident with school dinner prunes I had better not go into in case any of you were thinking of eating soon. The walk home was all downhill but sometimes if we were a bit late I would be taken back to school on the bus… ERG53, mostly.

At the time it was the newest single door vehicle on allocation at Crosville’s Runcorn depot. New in June, it spent a short time at Heswall before settling at Runcorn. It was usually selected to operate the 144 service [joint with North Western, hence the unCrosville-like route number] to Northwich.

It so happened that the 1307 departure from Runcorn coincided with my need to climb Bridge Street to Delph Bridge which was just by my school. So I remember the excitement of seeing it coming along and how I sat on the side-facing fuzzy green seats with their swirly pattern. It was all shiny and very modern-looking!

All my earliest memories are of bus rides. The Widnes Corporation PD2s to Hough Green on Thursdays to visit my grandmother; a Bristol K to Weston Point to accompany my father as he went to collect his pay packet from Castner’s gates. The dual purpose Bristol MW in a similar livery to ERG53 here that was waiting to take us back. They all made their mark.

In 1969 we moved to a larger house away from the town centre which was good because it meant more bus rides! Our local routes in that year were operated mainly by elderly LD6Bs which were soon replaced by brand new one-man RELLs with centre exits. My bus to school, though, was a schoolday extra, the J16, which could turn up any old bus. The demoted LDs would still come along on this trip, and some elderly MWs, with stitched leather seats rather than Rexine, were regularly used.

Coaches also appeared relatively often and the most memorable event was the appearance [I can still visualise it in slow motion] of brand new RELH6L CRL261 [TFM261K] in the summer term of 1972 when I was 8. I boarded at the stop across the road and my mother was on the doorstep waving me off. She was amused at how astonished I was. The TFM-K batch was the last to be delivered in Crosville’s classic cream and black livery, in fact only the first arrivals were so painted, the latter examples arriving in National Express white. The ones that were cream were quickly repainted so that by the autumn the whole batch was white. Any photo or sighting of them is to be cherished!

But my abiding memories of ERG53 are its regular appearances in my street from 1969-71, early in the morning on a works service that started its daily diagram. I had the bedroom overlooking the street and would go to the window to watch the buses go by. As I grew up I could predict when favourite buses would return as I got to understand the trip lengths, frequencies and interworking with other routes. But I would be up and out of bed before anyone else to watch ERG53 glide down the road. I think my last ride on it in Runcorn was in 1971 or 1972 on the J17 service. I still remember standing watching as it drove away up Heath Road until it disappeared beyond the traffic lights and into the distance, the three rear windows in the cream upper half of the livery that marked it out as a special bus. As 53 left Runcorn to work on the Cymru Coastliner service, brand new Seddons arrived, painted in the same livery [with a bigger, brighter, more modern-looking fleetname] because of their dual purpose seating. I liked them too but 53 remained in my memory as an absent friend.

Later, in 1977, I would finally be reunited with her in the PMT depot at Biddulph. The depot was shared with Crosville who assumed the North Western operations around the town when that company was fragmented in 1972. ERG53 later moved with her Crosville stable mates from Biddulph to an outstation on the site of Congleton’s cattle market until withdrawal in 1981 as I remember it.

After service with Crosville, ERG53 spent time with Liverpool Community Transport doing hires for community groups and schools, which saved it from being scrapped as most of the batch were [although sister ERG52 also survives at Birkenhead]. But it was to be a long time between rides on the old girl.

August 2012 and I attended the Bristol bus rally for only the second time and found ERG53 also attending. Having caught a Bristol MW to the Avon Valley Railway on the shuttle service, I was waiting for a suitable vehicle to take me back to the rally site when what should appear? I was able to take a photo on its approach using a telephoto from a bridge over the road. Looking back at the photo now I am struck by the unusual view of the cream roof and rooflights from my elevated vantage point… just like watching from my bedroom back in 1969.

To make an enjoyable weekend complete I was then able to travel back to Bristol on 53, my first ride on her in 40 years.