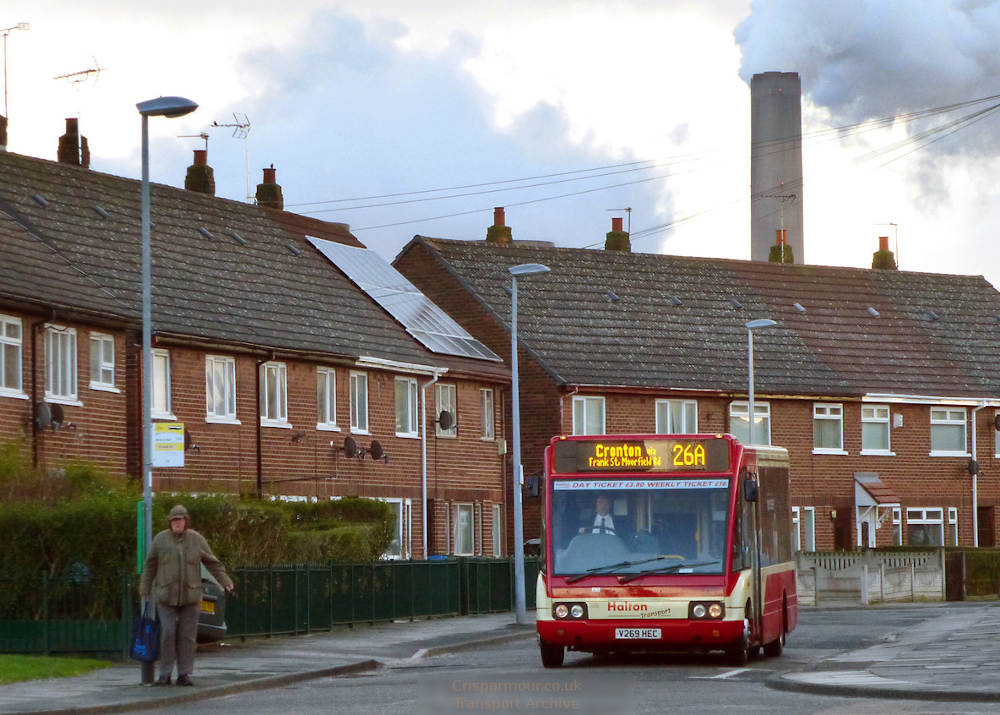 2013 seems a long time back now. It was the year Halton Transport invested in a new midibus fleet. Well, not a new fleet, a slightly used fleet previously with Blackpool Transport… for about 14 years or so. One of the first three Optare Solos is seen at Halton View in Widnes, but the view is oriented more towards Fiddler’s Ferry than Halton. In February 2013 Fiddler’s Ferry was still making smoke, steam and ultimately electricity. You will note that in Widnes it is customary to wait on the wrong side of the road, turn your back on the driver and give a clear hand signal. I think it has something to do with the chemicals in the air.

After a short while it was decided to disguise the age of the new fleet by buying registration plates issued in Northern Ireland, a ploy repeated the following year when a batch of Scania Omnicity buses was bought from Metrobus after service on a guided busway in the Crawley area. But in 2013 the bright new hope at Halton was the arrival of six Solos. These arrived in two batches of three, in January and August and were numbered 55-60.

The decision on a livery was largely made by the layout of the previous Blackpool scheme with cream going over the yellow and Halton red over the rest. The first three were deployed on a new circular service 26/26A which linked Halton’s loss-making round-the-houses service to Cronton via Halton View with another similar service round the other side of town that was extended to cover a new housing area and complete the loop by approaching Cronton from the other side.

This was all to the detriment of Widnes Commercial Motors which had been running a supported service 13 over the latter route for which the funding was withdrawn. The principal participants on the service, nos 55 and 56, had a rudimentary route branding which would typify the Halton approach in subsequent years, lacking a sense of style or sympathy with the vehicle’s design.

When the second three arrived in August they saw use on another local service, the 27 around Halton View which was cut back from its previous link with Runcorn over the river.

Even with the economy made by using smaller buses, the 27 was progressively cut back, its frequency being reduced from every 20 minutes to 30 and then hourly.

There being six Solos, two spares could be available for service elsewhere. The most likely places to see them in use were St Helens…

…and a new local service devised to link Appleton Village with the sleepy suburb of West Bank which declined after the 1961 road bridge was opened between Runcorn and Widnes. West Bank had been the terminus of the Transporter bridge crossing and benefited from lots of passing trade until the transporter was dismantled after the road bridge opened. The 9 was tentatively known as the “Buzzabout” and there was a bee logo for the timetable because it visited the Hive, a new leisure park with skating, bowling, cinema and predictable chain restaurants. No branding was ever applied to the buses.

The 26 saw reasonable use and had a regular rota of drivers who had a good rapport with the passengers. Compared to the dark days of 2012 when there were no buses from Widnes to Cronton on Saturdays, the 30 minute frequency Monday to Saturday was a big improvement and many new links were made possible by the circular route. The 27 and 9 fared less well.

The Solos also saw use on a short-lived contract operated on behalf of Merseytravel on Saturdays between Rainhill and Kirkby via Knowsley village. Occasional use on Merseytravel school contracts was possible, in fact as Halton became more desperate for serviceable buses at three o’clock on a schoolday afternoon one could materialise almost anywhere at a push.

Certainly excellent value for money was had from these vehicles but they didn’t project a great image of the company being nearly 20 years old towards the end of their stay. Nobody lamented their eventual withdrawal and replacement with short wheelbase Enviros.